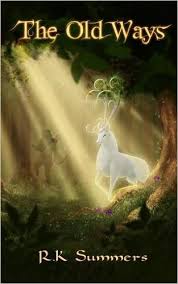 The night Thomas Rhymer’s young sister is stolen away by shadows and smoke, he discovers there’s more to life than the fields and forests he knows so well. If he has any hope of rescuing Alissa, he must first cross into a realm where magic is lifeblood, and where shadows dance with dragonfire.

With the help of the seelie faery Thistledown, Thomas embarks on a treacherous quest, deep into the heart of war-raved Albion. But getting his sister back means pledging aid to Mab, the usurped Queen of the Old Ways, against the tyranny of the Dark Prince.

Yet danger and deceit lie around every corner, and some secrets are better left untold.

RK Summers has woven her own particular magic into this adventurous retelling of Thomas Rhymer.  As a self-proclaimed enthusiastic as all things mythological, I am heartily dismayed at myself for reacting to the following sentence with revelatory surprise: “The Old Ways by RK Summers is a wonderful retelling-with-a-twist of the tale of Thomas Rhymer”. (inspired-quill.com)

The revelations were thus; first that Thomas Rhymer had a tale to retell and second that he was a real life person of some sorts from the old days (see what I did there?) of Bonnie Scotland. My self-disgust was soon assuaged with a huge wave of gratefulness to RK Summers and Inspired Quill for educating me and providing a new story bow for my folklore quiver. I think you should read it too, and here’s for why.

Thomas Rhymer is someone I think we can all relate to. He’s minding his own business, living his average life, trundling to market of a Wednesday, until he is enlightened about his family’s past. This swiftly plunges him into darkness before he begins to fight his way back to normality with the help of his loyal friends (and a sprinkling of magic).

I’m still undecided on Mab. She is the embodiment of magic, the loyal queen of her realm and leader of her magical folk. Yet, despite all of these strong accolades, she is weakened by the Dark Prince. She is in a constant downward spiral, resisting the magnetic pull of the prince while protecting her subjects.

Like Mab, I’m sure I shouldn’t, but I quite enjoyed the character of the Dark Prince. Severe mood swings and abusive behaviours aside, he did show a flash of occasional humility and a sharp, if a little warped, sense of humour. Maybe ‘enjoyed’ is the wrong word, but the tension created from his unpredictability was certainly intriguing.

Like any fantasy worth its salt, The Old Ways submerges us into a whole other world, which means a whole world full of characters to get to know. You have your handful of main characters, of course and the hoards of extras (think warring armies a la LOTR/ GOT). Then there are the middling characters; those who are bequeathed a name but are forgotten pretty rapidly as the next slice of action begins. There was a little too much time given to these middling characters (or too little depending on how you feel about grizzly old men in guest houses, invincible monsters or murderous siblings). The Dark Prince has far too many offspring, which are difficult to keep track of as a reader, never mind at family gatherings. No wonder they went the way they did. Speaking of, I’m not sure that I believed said offspring’s reactions to what was happening considering who their father was. But I am treading very close to spoilersville and so I will shut up.

I was always going to love this one. It has faeries and talking horses and magical realms and everything. The Old Ways would make a lovely Christmas gift for fantasy fans and/or a selfish treat! You can buy The Old Ways here. Enjoy!

One thought on “The Old Ways by R K Summers”

Join 1,172 other subscribers
Follow Tales From a Bruce Eye View on WordPress.com